Hegel's Phenomenology of Spirit by Georg Wilhelm Friedrich Hegel
My rating: 5 of 5 stars

There is absolutely no way I can review this work in any meaningful way without writing a book on this book.

So much of what is spoke of in this towering castle of cards is aimed at understanding the Geist, the whole conceptualization of Consciousness. Doing it, he had to work from Kant and build an entire edifice from practically nothing at all.

So, of course, he goes in some culturally obvious directions that make modern philosophers cringe. For example, he not only works through the cultural bias angle, but he also goes through the entire Religiosity angle, attempting to divorce spirit from religion and winding up at the point where people can have morals without the Church.

With me so far? Well, that's only two angles among many, and we really need a BIG Venn diagram to work out his entire phenomenology.

Just so you know, this BARELY scratches the surface: 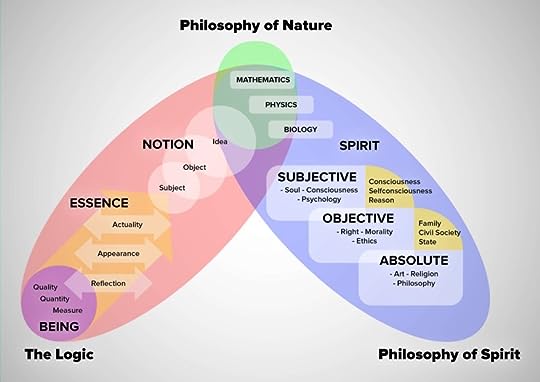 I found myself scratching my head at how dense and obscure it was in all the "In itself"s and wanted to strangle him for the needlessly recursive recapitulations.

And yet, for all the things that I, in my own culturally biased way, dismiss in Hegel as being a blind fool, I can still appreciate WHAT HE ACCOMPLISHED.

Cool, right? He worked from what he believed to be base principles, (religion being one of them, including God as an outside restrictive force,) to build a Mind. Or Spirit. Or Geist. The definition always errs toward the Whole Ball of Wax.

He also got pretty close to nearly formulating a complete formal-logic construct. :)

Of course, it's wrong. But we learned a LOT from Hegel. The Hegelian Dialect is something we all use today, bringing up Thesis and Antithesis, figuring out what went wrong, then doing it all over again until we reach The Truth.

Oh, for you weird fanboys out there, I should mention that while I was reading this, I noticed a very cool thing. Asimov worked out his own formulations of all these same points in Hegel's Phenomenology of Spirit in his Robot books. He explained the questions and anti-questions in a much more enjoyable, if not quite as thorough, way.

My appreciation for Asimov just went through the roof.

View all my reviews

Search for a book.

Brad Horner
Writing is a lifestyle choice. Don't judge me. ;)