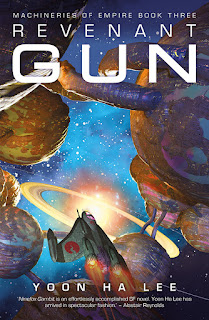 I got the opportunity to get an insider scoop on Yoon Ha Lee's perspective when writing this trilogy! I hope you enjoy! These books are a personal favorite of mine and I couldn't be happier. :)

When I first thought about writing Ninefox Gambit, I was so nervous about the prospect of writing a whole novel from outline that I did a "test run" by writing a 27,000-word Fullmetal Alchemist fanfic from an outline.  I'd been writing short stories ever since I decided I wanted to be a writer in 3rd grade, although of course the early ones weren't any good.  But eventually I got to a point where I could sell my short stories pretty reliably.  Novels, on the other hand--novels were a completely different animal, and I was hesitant at first because of the greater time commitment involved.

I did manage to complete the fanfic, though, so I decided it was worth giving Ninefox a go.  It was hard at first, because I was struggling with learning how to structure a novel, and sustaining characterization as well.  I almost gave up several times because I was so discouraged, but I persevered with the encouragement of my sister and some friends.

Raven Stratagem felt easier to write simply because I'd completed one space opera so a second felt more possible, even if I was going in with all-new POV characters, and three major ones at that, as opposed to Ninefox's one main POV (Cheris) alternating with a bunch of throwaways.  It also helped that I was writing in the same world, as it was a sequel, rather than inventing something from scratch.  Even so, braiding three main POVs came with its own challenges.  I ended up having to write Mikodez some additional chapters and reorganizing the chapters' order in revisions to try to smooth out the pacing.  In particular, getting the midpoint in the right place, since it serves as the keystone of the plot, was tricky.

In a way, the original draft of Revenant Gun was the easiest to write because I had a little experience under my belt.  It also has a fairly straightforward plot.  I think it helped that my initial attempt focused on Jedao Two as the protagonist and POV character, with only a couple chapters delving into other characters' heads.  Of course, I ended up adding 40,000 words in revisions (the original draft was only 80,000 words long) and I had to make a lot of changes in response to beta readers' comments because a lot of the character interactions were out of whack.  Live and learn?

What I discovered was that it became easier to write longer works, to the point where writing short stories became tricky because I kept running over!  The pacing of a short story and a novel differ, and structurally speaking you can get away with more in a novel because you have space that simply doesn't exist in the shorter form.  I mean, I always wonder every time I begin something new if I've forgotten how to write, but having a short story try to become a novel is somewhat alarming.  Fortunately, I can always go back to outlining...
Posted by Brad Horner at 7:22 AM

Search for a book.

Brad Horner
Writing is a lifestyle choice. Don't judge me. ;)